My niece, Macy, is going to be born soon! I’m working on some paintings for her room. My sister / her mom wanted some jungle animals on an animal print background. I got the backgrounds done so far – wow, they took me like over 3 hours to do!

I got stencils for the backgrounds, but the stencils were really small. If I only used the stencils, then I would have had major repeating and it would have look too contrived. So, I did portions of it with the stencil, and then I filled in the rest with shapes that I painted by hand. Hopefully it looks “random” enough! 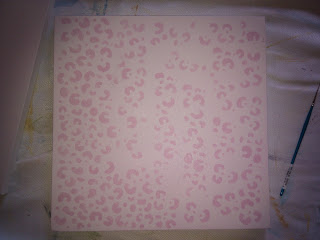 After (I filed in the rest of the print by hand): 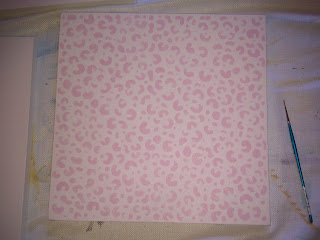 And here are all 3 of the finished backgrounds (the swatches on the left are the fabric swatches for the bedding, and the paint color for the room):

Now I just have to paint the animals on! I might do 3 monkeys, or a monkey and two other kinds of animals.